The pipeline project on Sioux territory and repression faced at Standing Rock was gut wrenching. Likewise, the protest was inspiring. An anti-imperialist struggle in the heart of the empire. Tribes standing with tribes continuing their centuries old resistance against colonialism and discrimination. Over a million virtual check-ins at Standing Rock on Facebook in just one day.

Nevertheless, when “Standing with Standing Rock” on social media gradually increased so did some thoughts and doubts concerning solidarity with indigenous resistance movements. Now that the battle at Standing Rock has been fought, and hopefully permanently won, I share these thoughts. 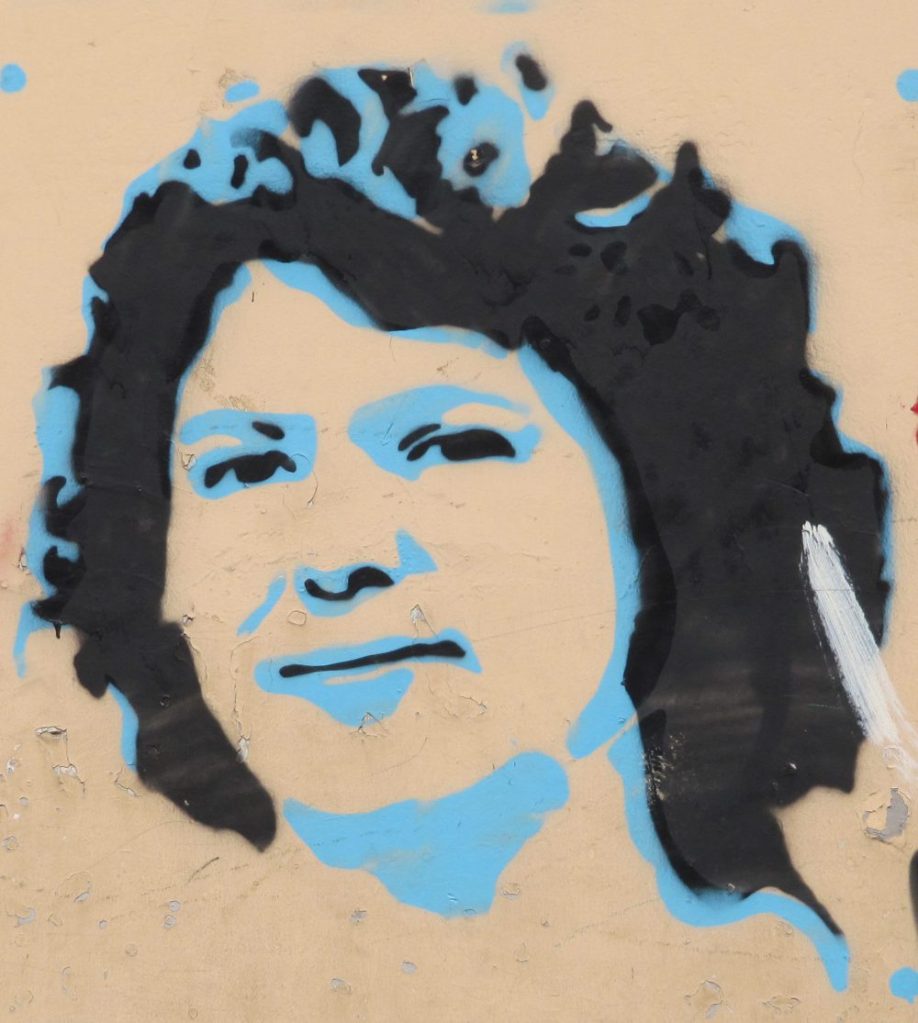 This year I found myself standing with activists in Honduras. Honduras is considered the most dangerous country for environmental and land activists according to a study by Global Witness. Between 2010 and 2015 at least 109 people were killed for taking a stand against destructive dam, mining, logging and agriculture projects.

A good deal of those people that take a stand, in Honduras and elsewhere, are indigenous. They are on the frontlines, their resistance the most persistent. Indigenous people also take most of the bullets … as did Berta Caceres, a well-known leader from the Lenca indigenous community. Berta was killed on the 3rd of March by hitmen who entered her house. Along with other members of COPINH (Consejo Cívico de Organizaciones Populares e Indígenas de Honduras) she fought to halt the Agua Zarca hydroelectric dam on the sacred Gualcarque River. Like the Sioux, Berta’s nickname was the Protector of Rivers.

The assassination of Berta and many other indigenous activists is not the exception to the rule. It is the rule. Assassinations, criminalization, violent repression, forced assimilation are common procedure in Honduras and anywhere else where indigenous people take a stand against powerful economic and political interests. The stakes are high.

Indigenous peoples make up just 5 percent of the world populations.1  Traditional indigenous territories alone are estimated to cover up to 22 percent of the Earth’s surface.2  Only a small part of of that land is however in their legal control and most often that control does not guarantee their autonomy. Land is a valued resource in this global capitalist economy. There is much money to be made in mining, logging, energy production, oil, agro-bussiness and drug-trafficking.

More importantly, the struggle of indigenous peoples goes beyond the rights to their lands and their resources. It is about preserving different world views and different conceptions of what development is. It is about survival and different identities. It reflects a centuries old struggle against colonialism, greed, racism and genocide.

The assassination of Berta Caceres did receive some global news coverage. After all, just a year before she was killed she received the prestigious Goldman Environmental Price for upholding indigenous rights. In most cases though, the resistance of indigenous peoples, and the repression they suffer, goes unnoticed.

So what makes the protest of the “Water Protectors” in North Dakota go viral while so many other struggles of indigenous peoples are unheard of, let alone accompanied by a solidarity movement? How come the continuing onslaught of attacks against indigenous peoples, their land and resources, their lives and identities, anywhere that may be, does not affect us in similar ways?

I presume some of the answers why Standing Rock went viral can be found in access to – and knowledge of – communication facilities, and the social networks the Sioux have with solidarity movements living in the USA. The lack of a language barrier, the physical closeness of sympathizers, the participation of celebrities, the strong and recent history of resistance of the Sioux and other tribes, living in the belly of the beast known as the USA, are also likely reasons. It could also just be a question of coincidence, as there are probably many native north-American struggles that had most of the above ingredients but were never heard of.

But here come my thoughts and doubts. It is curious how many stories and pictures about Standing Rock emphasized not the “why” of the protest but the “how”. The horses, the dances, the dresses, the spirituality within the protest. I emphasize, I have the utmost respect for the people and resistance at Standing Rock. I am delighted this protest counts on a big solidarity movement and achieved wide media coverage. Nevertheless I felt increasingly uncomfortable with some imagery and articles. It makes me wonder: how much of the attention to “The Water Protectors” at Standing Rock is due to the White Man’s romantization of Natives, particularly North-American Native Americans? When we stand in solidarity with indigenous peoples’ struggles how much do we romanticize? How much of this romantization ends up depoliticizing this resistance?

Sure, throughout their struggles indigenous peoples have used and appropriated this romanticized imagery of the “Ideal Indian” to advance their causes and gain attention. There is nothing wrong with such an inventive strategy. Probably much of this was happening at Standing Rock too. Definitely much of the dresses, spirituality and traditions of indigenous peoples are just genuine and authentic. This diversity should be celebrated and demonstrated. Preserving them is precisely what their resistance is about. Additionally, many indigenous struggles have led to a vindication of their identities by reaffirming and reinventing traditions but also appropriating and assimilating new ones – among them, beliefs from non-natives about what it means to be native. Great. That genuine appropriation is on their own indigenous terms to further their own goals.

Also problematic is the appropriation of indigenous identities by non-indigenous people on their non-indigenous terms. It seems the struggle at Standing Rock has awoken in many their inner Indian – Kevin Costner in White Fang revisited. Another appropriation worth mentioning is that of voice and discourse. Sioux at Standing Rock expressed worries that the support movement appropriated and changed the discourse of the protest by focusing on environmental change. Indigenous activist Kelly Hayes stated “For the Sioux the protest is about Native liberation, self-determination and Native survival”3.

Mid-november I stood at the first summit in Honduras of indigenous peoples and peasant communities against extractive projects. Myriam Myranda, a community leader of the Garifuna shouted they were not museum artefacts, that this struggle was about life and death. “If we resist we will take the bullets, if we do not act we will die slowly.” Around a thousand people responded “The fight continues!!!!”

The pipeline project, and struggle at Standing Rock are not isolated events. They are part of a continuing history of colonial greed and destruction. I stand with those standing at Standing Rock. I also hope its solidarity movement is the start of a global movement to stand with other indigenous and anti-capitalist struggles worldwide, on their own local terms. Time is ticking, they urgently need our solidarity.