Indigenous feminists in Guatemala encourage women to speak out against male violence, and to heal and defend themselves like they defend their ancestral territory. These are their stories of resistance.

An article published in print in the New Internationalist Magazine May – June 2019.

You can read it online here.

It is busy in the extended household of Graciela Velasquez Chuj, a Mayan healer. All the women have been summoned to prepare the food for a three day assembly. Around sunset some 40 indigenous women, mostly activists, arrive from all over Guatemala to the adobe house located in the village Chotacaj in Totonicapán, a municipality in the western highlands. After a quick presentation round and some food, they go to bed. Tomorrow they need to rise early.

At the crack of dawn the day starts with a ceremonial fire in which an abundant amount of candles, chocolate, flowers and honey are burned. Ancestors, life and the earth are honoured. Wishes and words of gratitude are whispered to the flames. After breakfast the women make themselves comfortable on the mattresses spread out in the courtyard.

The women talk about the fear, the threats, the assassinations and criminalization they suffer within their communities due to their opposition to the state, corporations and landlords. Most have come from territories where their people oppose projects such as mines, dams and logging. Indigenous peoples are at the forefront of struggles against the appropriation and pollution of their land and natural wealth. Various women here are leaders in that resistance. 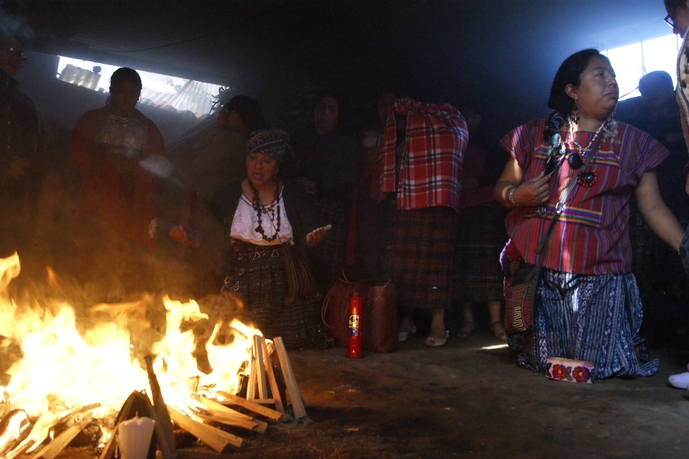 The women discuss racism – how centuries of colonization devalued and erased their identity and practices. They talk about impoverishment. The indigenous populations are the poorest in Guatemala, their women even poorer. Indigenous resistance is as much a struggle about identity and different worldviews on the purpose land and resources, as it is a class struggle with powerful elites about the very few means of subsistence left to them.

But the women also speak about something else. They talk about rape, teenage pregnancies, beatings, insults and femicides. Denouncing the violence perpetrated by men within their communities has long been taboo but there is a growing movement of indigenous women who dare to say, ‘Me Too’. Far away from the hills of Hollywood these women construct a feminism that connects women’s struggles to the indigenous struggles against capitalist development and racism.

The stories the women tell resemble that of Lorena Cabnal’s, a driving force behind these assemblies and the indigenous women’s movement in Guatemala. She tells me hers in the cosy bedroom of her small house in a poor neighbourhood of Guatemala City, which itself is a minor improvement on the slums she grew up in. Like many people there her grandparents came from different indigenous communities, fleeing from forced evictions and poverty. 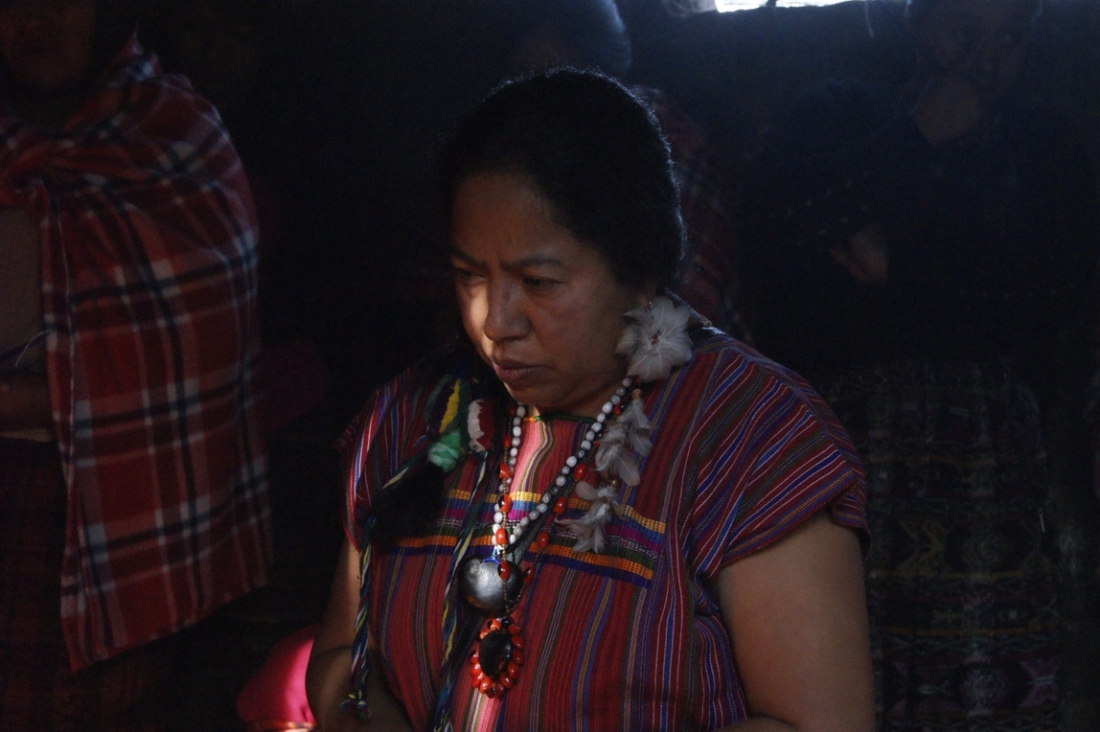 ‘When I finished my studies in 2002, I went looking for the roots of my maternal grandmother. She was a Xinka from Santa Maria Xalapán.’ Soon Lorena was getting active with other women to oppose the imposition of a mining project in the area. She became a prominent figure, her resistance putting her at the receiving end of several death threats. But Lorena not only opposed the mining corporations and powerful local elites. ‘For years my father sexually abused me. This determined my future struggles. I could not ignore the sexual violence inflicted by our own men on women and girls.’ Lorena rejects the romantic idea that indigenous gender relations are all peace and harmony. ‘Even before colonization, indigenous forms of patriarchies existed, colonization exacerbated them,’ she says.

‘It’s incoherent that indigenous men defend the land against mining projects but do not defend women and girls suffering violence.’ For Lorena the struggles for land and for women are inseparable. Western feminism also falls short. ‘How can we fight for the right of women to choose what to do with her body without ensuring a space that body can survive in? A land destroyed by mining violates women, too.’ She therefore calls her feminism territorial indigenous feminism.

Lorena’s increasingly high profile and the course she was taking, encouraging women to denounce the violence they suffered and to start using contraceptives, did not go down well with some in Xalapán. In 2011 the elders of the Xinka authorities of her hamlet, all men, told her to leave and never come back. 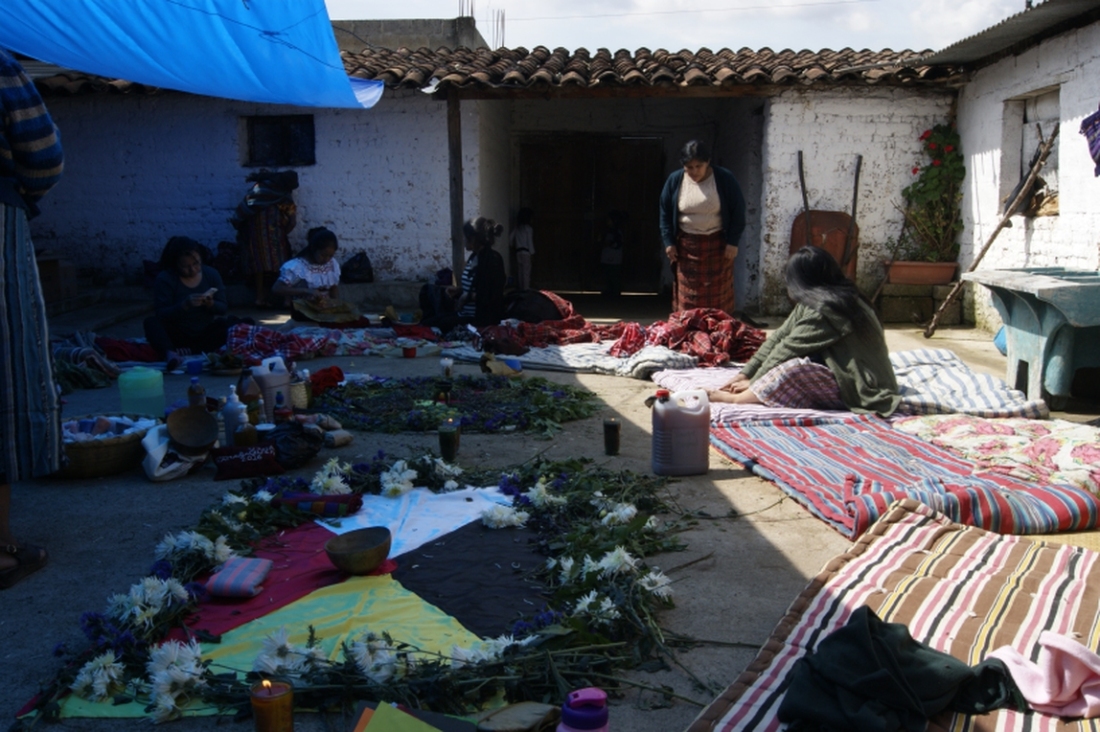 The ruptures with her partner (the father of her child), and with her land and community grieved Lorena. ‘Although I sometimes secretly returned to visit the women, I could no longer live in the territory that had been my home and where I had started my struggle.’ The forced displacement however also provided opportunities. ‘I travelled a lot and met women with similar stories, unable to live in the territory they defended because of threats from outside or within their communities.’

It was with some of these women that Lorena established Tzk’at in 2015, a network of indigenous territorial feminists who seek to accompany other women’s struggles with their healing skills. The healing Tzk’at and Lorena stand for is an act of resistance. ‘The violence we experience is rooted in racist, capitalist and patriarchal systems of oppression. To keep on opposing these oppressions and accompany others resisting, we need to heal, recover our joy and dignify ourselves.’

Besides being political their healing is also spiritual. Ceremonial fires like the one at dawn, or the coloured candles that burn throughout the whole event at Graciela’s house are indispensable. ‘Our practices build upon the wisdom of our Mayan and Xinka ancestors, on rituals still practised in our communities.’ Practical skills are also shared.

As evening falls in Totonicapán, the women listen attentively to their host. Coming from a family of ancestral healers, Graciela shares her knowledge about medicinal plants, restorative massages and Mayan gynaecology. Throughout the day the women do physical exercises together, take herbal baths and learn about strategies to keep themselves safe.

Healing is most of all about providing a space for the catharsis of fear, pain and stress. The women who want to share their stories speak, and others mention similar experiences. There are tears and silences. Despite this the atmosphere is relaxed, filled with embraces and loads of laughter.

Taking it back to the community

This is precisely why Sandra Calel, a Mayan Poqomchi’ whose organization Unión Verapacense de Organizaciones Campesinas (UVOC) opposes powerful landlords in western Guatemala, values these gatherings so much. ‘It strengthens me to talk and listen to other women,’ she says. ‘I realize I am not the only one suffering, that other women feel the same. It helps me to vent my fears and shame and carry on.’

However Sandra did not come here only to comfort herself. ‘I want to take this experience back to the women in my community. I want them to know we can do more than the housework, that we should not let ourselves be humiliated by our husbands or sons.’ It is a message that most men but also many women in communities like Sandra’s have difficulty assimilating. ‘Often men scorn me for being a female community leader. They react even worse when I mention the treatment of women. I still remember well a husband who got very angry. He shouted that what they wanted was land, there was no need to educate their women, [and that] I was destroying their marriages.’

The message Sandra takes to the community is not even that radical. ‘We talk about a balance between men and women. We explain that women also have rights. We don’t use words like feminism. They intimidate. Such concepts are also difficult to explain, there is not even a word for it in our languages.’

Lorena, however, also embraces some aspects of Western feminism. ‘Concepts like patriarchy and misogyny helped me to make sense of the world around me and the violence that happened to me as a child.’ This is why Lorena talks about feminisms not feminism. ‘Many hegemonic, middle-class and white feminisms standardize oppression towards women. The ways we are oppressed and how we experience and talk about it is, however, very different. The feminisms we conceptualize in response are also different. We have to embrace that plurality.’

Tzk’at and Lorena’s embrace of plurality and their critique of Western concepts also lead them to define LGTBI+ differently. ‘We break with the heterosexual and binary logic of indigenous communities but also with concepts like LGTBI+. Similar to how our territories are defined by plurality, we encourage all expressions of pluralities of bodies, identities and sexualities, whatever one wishes to be called, whatever works best for one’s emancipation.’

Although the act of identifying as LGTBI+ or feminist is not considered fundamental, some members of Tzk’at do describe themselves as such. Sitting down by her Mayan altar Graciela explains how she was attacked for being a female Mayan authority, for promoting Mayan gynaecology and spirituality. Identifying as a territorial indigenous feminist gave her the strength to oppose these attacks. While Graciela speaks, the women of her household keep bursting into the room asking for advice. It’s the last day and almost lunchtime. She goes to help them.

After lunch the women ready to leave. Some have to travel two days to get back to their communities. Many women have the same intention as Sandra. Once back in their communities they will gather the women, organize healing sessions, share their experiences about the multiple forms of violence they confront and talk about defending themselves and their bodies.

2 thoughts on “From a place of healing”

Support me & Apoyame & Steun me